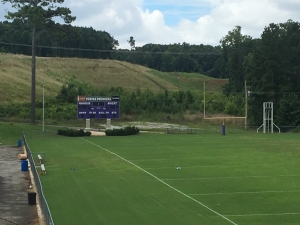 An investigation by the Tennessee Comptroller’s Office has resulted in the indictment of Cortney Braswell, the former head football coach at Central High School in Chattanooga. Braswell is currently a quality control assistant for the University of Louisville football team.

Comptroller investigators determined that Braswell pocketed at least $2,480 in payments he received from two semi-pro football teams that had paid to use the high school’s football field for their home games. The money should have been turned over to the school.

Hamilton County Department of Education policy requires groups seeking to use school facilities to complete a use form and have it approved by the principal and the Office of Risk Management. The form also requires applicants to submit proof of general liability insurance. Neither team submitted this information to the high school in 2017; instead, they stated there was a verbal agreement with Braswell regarding the use of the football field and rental payments. This created a liability risk for Central High School and Hamilton County Schools.

Investigators made numerous attempts to meet with Braswell. The coach initially spoke with investigators by telephone; however, the coach stopped returning investigators’ calls.

In May 2019, Cortney Braswell was indicted by the Hamilton County Grand Jury on one count of theft over $1,000.