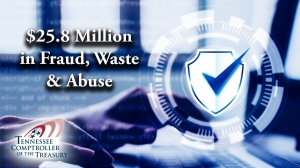 The Tennessee Comptroller’s Division of Investigations is marking a significant milestone. Since January 2016, the division has uncovered $25.8 million of fraud, waste, and abuse in Tennessee.

The division has published 218 reports since January 2016. These reports have resulted in the indictments of 131 people on 819 separate counts.

Comptroller investigators have investigated fraudulent activity in a variety of state and local government entities, and they have recently begun investigating the theft of private funds under certain circumstances. Many investigations are completed with the cooperation of the state’s 31 district attorneys general, and often in conjunction with TBI and other law enforcement agencies.

Since 2016, the Comptroller’s Office has released investigative reports revealing fraud, waste, and abuse in 79 of the state’s 95 counties. The new Mapping Tennessee Comptroller Investigations webpage allows any Tennessean to quickly view data and information about fraud cases in their area. This site can be found by going to tncot.cc/mappinginvestigations.

The Comptroller’s Division of Investigations is made up of 33 staff who are committed to the Office’s mission to make government work better. Many investigations have resulted in significant changes that have improved accountability and oversight in government entities.

“There is no place for fraud in Tennessee, especially when it involves the theft of taxpayer money,” said Comptroller Justin P. Wilson. “Our investigators have relentless determination to uncover criminal activity and make recommendations that improve government operations. Their work should serve as a warning to anyone thinking of stealing from a Tennessee government.”

The Tennessee Comptroller’s Office is announcing this milestone in conjunction with the Association of Certified Fraud Examiners’ International Fraud Awareness Week which runs from November 15-21, 2020.