Tennessee Colleges and Universities Will Save $112 Million 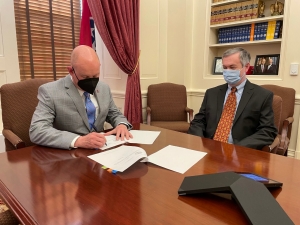 The TSSBA’s largest bond sale in history was held during the week of February 8, 2021 and closed on February 24th. Because of the TSSBA’s highly-rated credit, investor interest allowed the Authority to reprice most of the maturities of the bonds to at least five basis points lower than the price that was initially offered.

The bonds will be repaid with revenues generated by those projects that were financed by the Tennessee’s public higher education institutions.

“The pandemic has caused unique challenges for our state’s public colleges and universities,” said Comptroller Jason Mumpower. “The savings generated by this sale are unprecedented and will have an immediate and lasting impact. Tennessee continues to be a very low-debt state, and we’re fortunate that our fiscal stability is very attractive to investors.”

“Tennessee is a well-managed state,” said Secretary of State Tre Hargett. “This successful sale is a testament to the conservative fiscal management demonstrated by the governor, the Tennessee General Assembly, and the TSSBA.”

“This is yet another example of how Tennessee continues to benefit from smart management of our financial resources and strong fiscal leadership by the Tennessee General Assembly,” said Treasurer David Lillard. “Our low debt and high credit rating continue to yield greater savings allowing us to reinvest in Tennesseans.”

"Tennessee's commitment to stewardship is again paying off in a big way despite the disruptions from COVID-19,” said Governor Bill Lee. “These funds result in more than $100 million that directly support critical needs for higher education and I commend Comptroller Mumpower and his team for their work."

“We can do this today because of our state’s history of conservative budgeting and fiscal stability,” F&A Commissioner Butch Eley said. “Our consistent efforts toward greater efficiencies in operations, investing tax dollars wisely, and maintaining strong reserves pay off in many ways, and this is an example of how we benefit from those efforts.”

“We are grateful that the TSSBA took the initiative to generate more than a hundred million dollars in savings for Tennessee’s higher education institutions,” University of Tennessee System President Randy Boyd said. “TSSBA’s hard work and diligence will translate into tremendous benefits for our campuses.”

“This is great news for the state’s public colleges and universities. On behalf of the Tennessee Board of Regents, we’re grateful to Comptroller Mumpower and his team for their work on this historic refinancing,” said TBR Chancellor Flora W. Tydings. “All Tennesseans benefit from the sound fiscal policies and financial expertise our state officials have long exercised and this is the latest example.”