Problems Center Around Installation of Broadband and General Operations 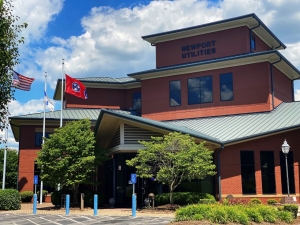 The Tennessee Comptroller’s Office, working in conjunction with the Tennessee Valley Authority Office of Inspector General, has completed an investigation into Newport Utilities (utilities) which provides electric, water, wastewater, and broadband services in the City of Newport and surrounding areas.

Beginning in 2016, the utilities began installing a broadband system in its service area. As part of the original business plan, utilities management planned to fund some of the initial construction and maintenance costs with an interdivisional loan from its electric division. Newport Utilities and TVA executed an agreement in September 2017 which allowed the electric division to loan the broadband division up to $3.3 million for capital expenditures associated with the broadband project. Investigators determined that Newport Utilities exceeded that amount by at least $4,692,654.

In May 2017, the Comptroller’s Office had also reviewed a detailed business plan for Newport Utilities and could not determine if the plan was feasible based on certain assumptions and methodologies in the plan, including failing to consider the impact of market competition.

Utilities management also failed to establish a separate accounting unit for its broadband division to track revenues and expenses despite advice from consultants, regulators, and its external auditing firm. A separate accounting and record keeping system is also required by state law.

Additionally, utilities management did not document that competitive bids were solicited for certain broadband related construction, supplies, and other services. For example, in one instance a company tasked with installing fiber in individual homes ordered at least $519,545.80 in supplies that were billed to the utilities. Investigators found no evidence that the utilities had either a contract with this vendor or that the supplies had been competitively bid. A subsequent analysis performed by the utilities concluded the vendor charged more than double the price of its competitors in some instances.

The investigative report also describes several other issues which are summarized below:

The results of this investigation have been communicated to the Office of the District Attorney General of the 4th Judicial District and the United States Attorney’s Office for the Eastern District of Tennessee.

“Utility boards have a fiduciary responsibility to ensure there is adequate oversight of public funds and management decisions,” said Comptroller Mumpower. “As our report notes, this oversight failure led to noncompliance with state law, grant agreements, contract provisions, and substantial wasteful purchases.”