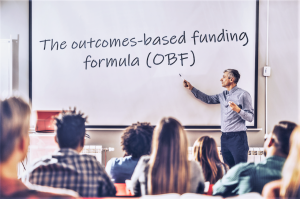 The Tennessee Comptroller’s Office of Research and Education Accountability (OREA) has released a suite of publications examining the outcomes-based funding formula (OBF). The formula generated $1.1 billion for public colleges and universities for the 2020-21 school year. The formula uses a point system, in which a variety of measures within three main components (weighted outcomes of performance, fixed costs, and quality assurance) are used to determine each institution’s point total. The proportion of state funding that will be appropriated to each institution is then calculated using the point totals.

OREA found OBF points earned by all institutions have increased by 7 percent since 2016-17. There was variation in performance between different types of institutions, with the community college sector earning the largest increase, at 9 percent. The General Assembly has increased the state OBF appropriation each year since 2016-17. In total, there has been a 25 percent increase in the state OBF appropriation since 2016-17, driven by increased outcomes, inflation, salary and insurance increases, and other changing costs.

In An Explanation of the Outcomes-Based Funding Formula (2015-2020), OREA explains each step of the formula – from data collection and processing to final funding recommendations – by defining key terms and using real-world examples. The Outcomes-Based Funding Formula: Profiles of Tennessee’s Public Universities and Community Colleges outlines how each community college and university has performed under the formula during the 2015-2020 cycle, exploring OBF components such as:

·         a comparison of each institution’s change in points to that of other institutions; and

OREA has also produced interactive OBF dashboards for the state’s public universities and community colleges. The dashboards display institutional outcomes and state appropriations under the OBF. Users may select an institution to view its specific makeup of formula components and performance data, including outcome data, mission weights, point totals, appropriation share and point growth, and more. When no institution is selected, the dashboards serve as a comparison tool showing all institutions’ performance. OREA has also prepared a video tutorial providing context to the dashboard reports and explaining how to navigate them.

To view the reports, interact with the dashboards, and watch the video, please visit the Comptroller’s OREA website at: tncot.cc/orea.