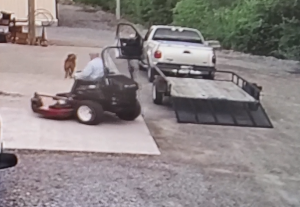 An investigation by the Tennessee Comptroller’s Office has resulted in the indictment of Ashland City Mayor Steve Allen.

Allen was seen on town surveillance cameras during two of the three instances. The surveillance footage also shows Allen towing a town-owned trailer to haul the zero-turn lawnmower as he left the Public Works/Utilities Building. He was also seen on surveillance video at the town public works facility in August 2021 when he authorized the use of town equipment and personnel to repair his personal lawnmower tire.

Town policy prohibits the authorization of use of town property for “private gain or advantage to oneself.” The policy also prohibits town employees from having tools or equipment in their possession unless they are acting in their capacity as town employees.

Investigators are also questioning $3,290.53 in food purchases made by Allen using a town credit card. Allen made 75 questionable meal purchases, and he failed to provide supporting documentation for 27 of them. Allen had been instructed by a town official to only use the credit card for town business; however, he subsequently began taking multiple individuals for meals purportedly for business purposes.

“It’s important for local governments to have clear policies surrounding a variety of activities,” said Comptroller Jason Mumpower. “Our investigators recommend that Ashland City have written polices over the use of credit cards and business-related meals. A lack of policies contributes to an increased risk of improper and questionable uses of public funds.”