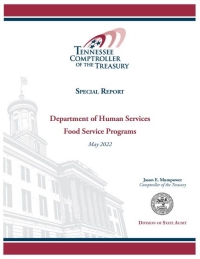 The Tennessee Comptroller’s Office has once again found issues with sponsors participating in the state’s two federally-funded food programs – the Child and Adult Care Food Program and the Summer Food Service Program for Children, which are administered by the Tennessee Department of Human Services (DHS). These programs most commonly provide snacks and meals to children.

A new special report from the Comptroller’s Division of State Audit reveals issues identified with two food program sponsors that were reviewed as part of the state’s fiscal year 2021 Single Audit. The two sponsors are New Beginnings International Ministry, which operates feedings sites in the Nashville metropolitan area, and Giving Youth a Chance (GYAC), which operates sites in the Shelby County area.

New Beginnings and GYAC have both participated in the food service programs for more than five years and have received millions of dollars in reimbursements. Throughout those years, both the Comptroller’s Office and the Department of Human Services have identified deficiencies and areas of noncompliance within both entities.

The special report notes the following issues related to Giving Youth a Chance:

Ultimately, the Comptroller’s Office has questioned 11,781 meals claimed by both sponsors, totaling $63,304 in questioned costs. The results of this special report have been shared with a number of parties including state and federal prosecutors.

“Both of these food program sponsors have a history of problems, and they’ve shown an inability to achieve permanent corrective action,” said Comptroller Jason Mumpower. “DHS has policies in place to remove sponsors who fail to correct issues. We’ve been pleased to work closely with DHS on addressing red flag situations like these.”

“During the last several years, the Department of Human Services has taken steps to strengthen the monitoring of food programs for compliance, while remaining mindful of the need to feed vulnerable children and adults across our state,” said DHS Commissioner Clarence H. Carter. “Our ongoing partnership with the Tennessee Comptroller allows us to ‘double-down’ on monitoring efforts and further advance our shared goal of combating fraud, waste, and abuse wherever it is found. DHS will continue to review internal processes for addressing site attendance inconsistencies and consider any additional safeguards permitted by applicable federal law and regulations.”